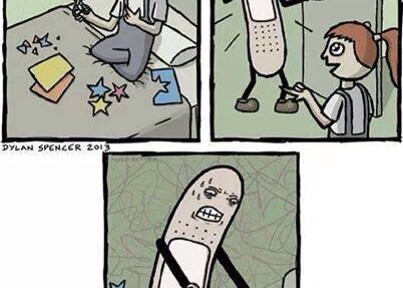 by John J. Fanning I came across this cartoon today on Reddit and immediately felt it parodied some of the many communications failures I have witnessed as a professional in the communications business.

All business is about deal making and the art of deal making centers around understanding fully what is being communicated between both parties.  The World is filled with lawyers who make their living through litigating contracts that one or both parties failed to fully understand.  But when the lawyers are called in, the deal has already failed and from that point on, more money and time is being thrown into a failure that should never have happened in the first place. Most of the failures I have witnessed came about because one or both parties sought an applied approach to their dealmaking.  By this I mean that when people get an itch,  they have a tendency to focus solely on scratching that itch. Take the Chicago parking meter debacle for example.  The City needed cash and maintaining parking meters with city workers was costing nearly as much as was being returned in revenue.  Along comes an outside source that promises to ease the City’s pain and a deal is struck.  Now Chicago citizens and visitors are being strangled by high parking fees, which primarily, benefit only that private firm. With all the resources the City had at its disposal, it might seem incredible that no one would look at the deal being proposed and identify potential long-term adversities. But as a person who spent time working in government, I can assure you that more often than you may think, sheer momentum pushes bad ideas through the system. Bad communication doesn’t just occur in government.  Plenty of communication failures occur everyday in the private sector.  A couple of famous examples are United Airlines, who once spent millions of dollars trying to change its name to Allegis and, of course, the New Coke debacle that came from Coca Cola.  In both those examples millions of dollars were spent testing the new product or name through surveys and sampling.  But neither company ever communicated with stakeholders.  Momentum took over driving those ideas towards a decision and, ultimately, failure. While its common for most business leaders to run things by their legal team before making a final decision, legal teams are not communications teams.  While an attorney will scrutinize every word in a contract, he or she will not generally understand your industry or business nor have contact with stakeholders within or related to your organization. We are in the communications business and a key silo within our firm comes in the form of government services.  A major part of that service is in the way we help public administrators and elected officials make smart decisions through effective communications with their constituents.  Our team is constantly mining information from the public to determine the wants, needs and opinions of consumers and the general public.  It is those streams of communication and our ability to analyze communication that permit us to study opinions and measure results.  Invariably, the best way forward for both business and government is known by consumers and citizens. What is needed is the right resources to tap that knowledge and navigate the path ahead. Like marketing, public policy should not be about guessing what regulation or ideas the public wants or needs. Marketing is about knowing beforehand what consumers want and need as well as the potential for unintended consequences. Public officials should be using similar research to determine what their constituents want and need and how proposed legislation may unexpectedly impact some stakeholders. The long and short of it is that just like the products and services we market for business clients, we make government smarter and more popular.  And that’s something that is more important today than ever before. We are Fanning Communications and this is what we do.