Village of Crestwood - The Adviser

The Village of Crestwood has published their local monthly newspaper, The Adviser, for over 3 decades. The Village wanted to update the look of the newspaper to reflect the community better and to increase its content and advertising. Fanning Communications redesigned the publication and produce it monthly for the Village. 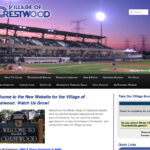 The Village of Crestwood wanted to upgrade their current website. They needed to make the information offered more robust, wanted to make it easier and quicker to update and wanted the visual look of the site to reflect the greatness of the village. Fanning Communications worked closely with designated Village personnel to organize, revise and […]